I heard a nasty online rumor that in the upcoming world of Office 2013, SharePoint Workspace (SPW) will be no more. Whether that’s true or not, it reminded me that I have yet to write a post about SPW – what it is [was?], and what

some of its neat features are [were?].

I’ve met enough SharePoint users who don’t know anything about SPW to guess that many of you reading this may also be new to the concept. Even less have probably heard of its cousin Groove Workspace. If you’ve never seen SPW, but you have Office 2010 Premium installed on your computer, go to Start > All Programs > Microsoft Office hit the Windows key and type “workspace” to receive your prize.

If you’ve got it, fire it up and follow along as I talk about a few of the kool things it can do:

When I’ve described SPW to clients in the past, making an analogy to DropBox or other cloud-based folder-syncing services has always been helpful. SPW allows you to save documents to SharePoint by simply saving them to a local folder. I’ve encourage this in the past for clients and colleagues who were [passive aggressively] fighting the corporate requirement to manage documents in SharePoint – this way, they can participate while still looking like a rebel. :) 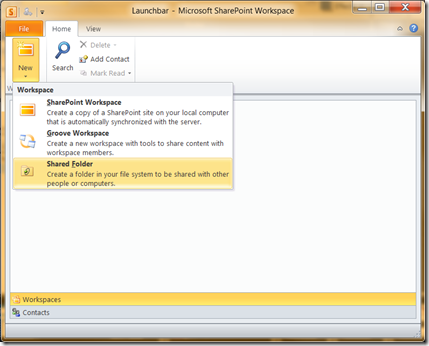 We all know how much work we can get done while flying coast-to-coast on the plane. So we’d love to have an offline version of our SharePoint sites to work with, right? Enter SPW. From document libraries to lists, you can sync up, unplug, do your thing, and re-sync when you’re back online. 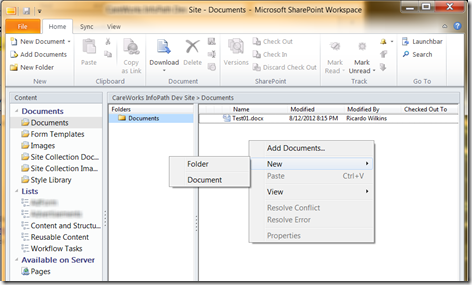 You know how you’ve been wishing there was an Alert you could create that would just tell you when someone has put anything new anywhere within the SharePoint site? Well, this ain’t that – but it’s close. 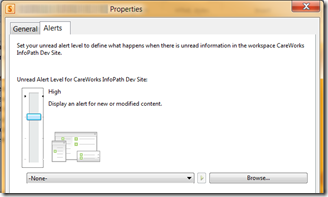 Similar to SharePoint Designer, you can think of SPW as the desktop client experience for SharePoint. This might interest those of you who still complain about having to use a browser to get your work done. Give it a try and see what you think, but in general I’d advise you to get over your issues with the browser – that seems to be the way of the future, my friend.

Obviously, this was the 10,000 ft view of SharePoint Workspace, but I thought I’d at least give it a little attention before it meets the same fate as Google Wave.

Posted by Ricardo Wilkins at 9:09 AM
Email ThisBlogThis!Share to TwitterShare to FacebookShare to Pinterest