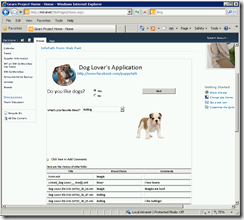 Posted by Ricardo Wilkins at 10:45 AM 2 comments:
Email ThisBlogThis!Share to TwitterShare to FacebookShare to Pinterest
Labels: end-user, InfoPath, presentations

SharePoint made an appearance at Codemash this year!

This great event is normally light on SharePoint love, but this year I was able to present a 20-minute vendor session for Improving Enterprises that focused on the development features that a [non-SharePoint] developer should know about when contemplating SharePoint development. In my opinion, SharePoint as a dev platform can be a developer paradise because of large collection of tools, libraries, services & utilities at your disposal. And as I’m exploring the Visual Studio 11 Developer Preview (more on that to come), I think many will see that it’s about to get even better.

You can find my slide deck here, and for more info on Codemash, check out the website, or view the very active twitter feed.