Today I attended a local Sharepoint Conference sponsored by our User Group. Kudos for a job well done! Topics included:
Interestingly enough, I think I learned the most not so much from all the expert presentations, but rather from the Local Spotlight track, where local folks gave presentations on how they are using Sharepoint in a real-world environment in their own organization. Sometimes all the APress books and Level 200 demos in the world just can’t beat good ole fashion real-world scenarios! ;-)
Posted by Ricardo Wilkins at 5:50 AM 2 comments:
Email ThisBlogThis!Share to TwitterShare to FacebookShare to Pinterest
Labels: conferences

Sharepoint adoption outside of the workplace

Although I work daily on Sharepoint development as part of my job, I also think Sharepoint is such a great tool that I’ve also been using it at home.  I administer two WSS 3.0 sites for my two small group bible study groups from church. 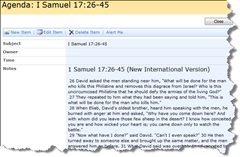 It helps with the distribution of readings, membership rosters, and calendars.  Each study meeting has it’s own meeting workspace.  The discussion boards allow for additional conversations on the readings.  And we even have a convenient way of posting Prayer Requests and Praise Reports.
But, just like in the workplace, adoption is slow.  My study groups have certainly accepted e-mail as a way for us to communicate, but Sharepoint as a way for us to collaborate has only caught for some so far.

For instance, I’ve realized that the simple power of sending readings as text via email

is still more valuable to some than posting a nicely-formatted list item of the reading into a document library.  They prefer reading it directly from their phones & blackberry’s as opposed to logging into a website.  My first thought was to combat this preference by using the power of the built-in mobile version of WSS sites.  However, that feature is very weak.  Most things in the WSS site don’t translate well, if at all, to the mobile version.  And meeting workspaces don’t work period.  I appreciate that Microsoft threw that little extra feature in there, but it feels more beta than anything else.  I wait for the day when that becomes full-feature.

My personal use of WSS helps remind me that there are still some simple technologies and methods that still make sense in today's WSS world.  It’s important to be realistic about the needs of your audience, and not pull out the WSS hammer for every one of their nail needs. :)
Posted by Ricardo Wilkins at 10:04 PM No comments:
Email ThisBlogThis!Share to TwitterShare to FacebookShare to Pinterest
Newer Posts Older Posts Home
Subscribe to: Posts (Atom)