Putting a Cool Glow on your XML code

Lately I’ve been looking over the XML code contained in the Application Definition File for some SharePoint Business Data Catalog work I’ve been doing. As I normally do, I used Visual Studio as my XML viewer of choice. But I had to pause for a second to sit back and appreciate how Visual Studio 2010 makes looking at all that XML code a lot nicer. : ) 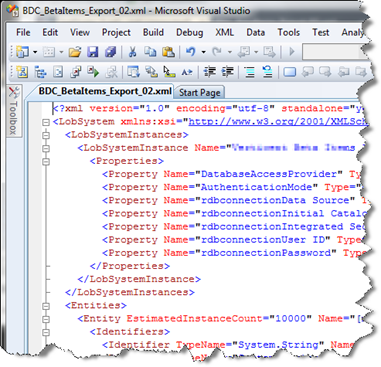 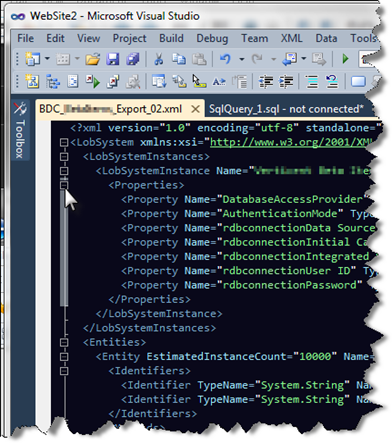 Oh, yeah! : ) First off, lemme say that all the kool kids like myself use the Cool Glow style as their Visual Studio theme. White backgrounds are so 1990’s. ; ) But I also like the subtle addition to Outlining that VS2010 has added. You may notice from the screenshot that it shades the portion of the code that would collapse for you if you so choose. Although I can see that as well via the indentations of my XML code, that little feature is a nice one.

Oh well – enough of the pretty color stuff. Back to shoving more external line-of-business data into my SharePoint farm. See ya!
Posted by Ricardo Wilkins at 5:19 AM
Email ThisBlogThis!Share to TwitterShare to FacebookShare to Pinterest
Labels: Visual Studio